The headline of a recent CBC article states “Did you hear? Gossiping with coworkers can be a good thing” (November 7, 2016, cbc.ca). The article indicates that “Too much gossip can be highly toxic in a workplace, damaging relationships between coworkers” but “When done the right way, it can be beneficial”.

As someone who routinely witnesses, investigates and remedies workplace gossip I have to respectfully disagree.

In doing so, I wish to clarify what I mean by gossip (both in this blog and in the training and investigations that I conduct). As per the Miriam Webster dictionary, gossip is commonly understood as:

Contrary to the article/interview, professional networking (that is, talking to others about their general workplace experiences and professional connections or gathering information about an organization (either prior or subsequent to being hired) does not fall within this definition.

Gossip is about individuals sharing personal information about others, in their absence. Often, it is highly sensitive, invasive and/or critical in nature. More often than not, the person eventually finds out that others are “talking” about them which results in feelings of betrayal and a loss of trust in those involved (including the initiators and recipients of the gossip – that is, anyone “huddled” by the water cooler or locked inside a closed office somewhere).

Even when the person is unable to confirm the gossip, they often detect that a group of individuals is excluding them, or “recoiling” from them, without fully understanding why.

In many investigations I conduct, those affected by gossip become very emotional. They repeatedly ask why those involved did not speak to them directly.

Every one of us has gossiped – and has been gossiped about. And each one of us knows how very hurtful it is to be on the receiving end of this process.

Commonly, individuals do not engage in gossip as a conscious or intentional act of inconsideration or disrespect: colleagues often “vent” to each other about others to “support” each other or to speculate or “brainstorm” on “what is wrong” with the person in question. Sometimes, the gossip is to share some bad news about a person “for their own good” – that is, so they don’t have to repeat it themselves.

None of these reasons, even when done with no ill intent or with the “best of intentions”, detract from the fact that: (a) gossip is not a constructive form of problem-solving; (b) it is a form of workplace disrespect (and if done on a persistent basis, could constitute workplace bullying/harassment); and (c) it is hurtful to talk to friends/colleagues about a co-worker’s professional or personal life for whatever reason, in the absence of their awareness and consent.

The only exceptions to this are when: coworkers speak to a legal or union representative or workplace leader, in confidence, about their concerns with a staff member; a leader speaks to other leaders or human resources about a staff member in an effort to address workplace behaviour/concerns; or a colleague knowingly shares information on behalf of the person being spoken about (e.g. sharing details about a death in the family). In each of these circumstances, the information is not gossip: it is information properly being shared in the workplace, either for valid, good faith, operational reasons or in accordance with the person’s awareness and consent.

The article mentioned an example of “good gossip” (which, in my view, is anything but):

For example: I talked to a worker who would talk to younger guys about a carpenter on a construction site. He told anyone who was new that a certain carpenter tended to yell at anyone who interrupted him when he was trying to concentrate.

He told them, “Don’t worry about him, he’ll yell at you in the morning and forget all about it by noon.”

In my view, this is not an example of “good gossip” and is not advice that I would support or encourage.

First, it is disrespectful for employees, regardless of their tasks or level of seniority, to yell at those who interrupt them (at any time of day). Employees can certainly ask others not to interrupt them while they are trying to concentrate. However, this needs to be done in a measured and controlled manner. Even better, information about colleagues’ work preferences should be shared openly and directly as part of orientation and general introductions.

If an employee asks not to be interrupted – and is repeatedly ignored, he/she can and should seek reinforcement and support from a leader.

However, the answer is not to allow this person to continue yelling at others – or to allow others to talk behind their back when they do.

Any advice that implicitly allows for these behaviours to continue flies in the face of current workplace policies and legislation mandating basic respect and civility (on the part of everyone involved).

Employees who experience disrespectful behaviour or see it happening to others are expected to help put an end to it – either by speaking to the person involved or by reporting it to a workplace leader. What they are not entitled to do is stand by and allow this behaviour to continue and/or talk about this behaviour behind the person’s back, without letting them know and giving them an opportunity to change.

I am an advocate of organizations investing in relationships amongst colleagues and leaders through increased opportunities for communicating and socializing with each other. Individuals who get to know each other learn to trust each other, and trust is a key ingredient to respectful relationships and workplaces.

However, communicating and socializing to and with each other is very different from speaking about each other. The former builds bridges and the latter tears them down. It is critical for each of us to know the difference and proceed with care. 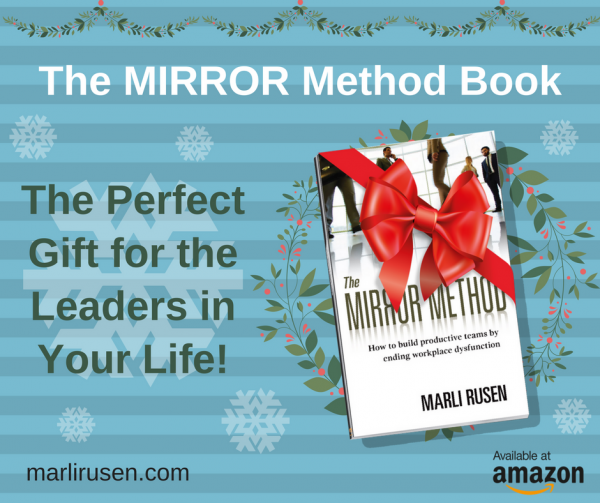 Subscribe to our newsletter today to receive helpful tips, resources and, of course, our latest blog posts.